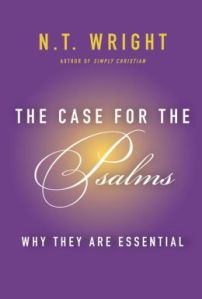 Now in the store.

Things staff at Crux like to hear during the textbook rush:

Things staff at Crux are not fond of hearing (multiple times) during the textbook rush:

Smile at your local bookseller and always remember to say Thank You.

September is almost over. The staff picks for the month have been sitting on their shelves opposite the cash register. Just in case you haven’t seen our September picks here is one final review for you.

Cindy’s Pick: Generous Justice: How God’s Grace Makes Us Just by Timothy Keller. Cindy recommends that you read this book along with some more practical books such as When Helping Hurts by Steve Corbett & Brian Fikkert or Walking with the Poor by Bryant L. Myers. 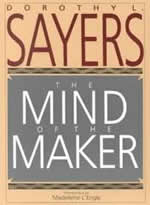 Heather’s Pick: The Mind of the Maker by Dorothy L. Sayers, a theologically rich reflection on the writing process.

Pam’s Pick: The Ragamuffin Gospel by Brennan Manning. Pam was reminded of this book after Manning’s death this year. She enjoyed reading it for its practical wisdom.

Alain’s Pick: Paradise Lost by John Milton. Reading a classic work is always a good idea, especially if you’ve got a good guide.

Andrew’s Pick: Good News About Injustice:A Witness of Courage in a Hurting World by Gary Haugen. This is Andrew’s last monthly pick as he has moved on to an exciting new job. He says this is a book that makes you think about global justice issues.

Sheila’s Pick: Letters to Malcolm: Chiefly on Prayer by C.S. Lewis. Sheila recommends reading and re-reading this one.

For more on what the staff thought about their picks for September, check out the staff picks page on the Crux website. (If you click through after September 2013 finishes, you’ll find the current month’s staff picks.)

Day 15th arrived faster than I thought, and consisted of about 2 hours of work only.  Arriving late afternoon, my canoe was already waiting under the canopy, as it looked like rain was on the horizon.  Today’s work?  Yet another, but thankfully the last, coat of varnish  for the gunwales, decks, seats and thwarts.  (I know the pictures look pretty much the same as the last two days, but I assure you that progress is being made.) 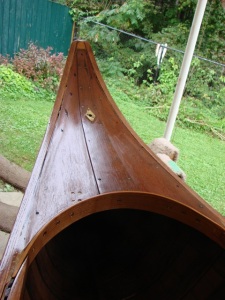 This time I took it really easy on the sanding, particularly of the decks.  The last time I sanded too aggressively and ended up taking off too much varnish.  After sanding came the regular blowing (and brushing) off the dust followed by tack clothing.  Then the final full strength application of varnish.  As opposed to day 14, when several things went wrong, I was careful to take my time and even did the seats and thwarts inside to avoid dropping anything in the grass.  Thankfully the wasps were not numerous today, so I didn’t get varnish any place other than on the canoe.  I made sure the final coat was fully applied and fairly thick going on, but even when finished the decks were still sucking in the varnish… talk about thirsty.  Roger said he would check them in a day, or so, and apply another coat if needed. 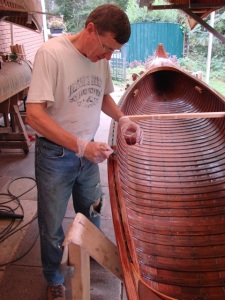 I then scheduled my final visit, again in another week’s time, as this project is quickly coming to an end.  Roger said the last day will be about 2 hours of work.  What is left is the installation of the external keel, and the securing of the thwarts and seats into the canoe.  Yippee!! Looks like it may be in the water before Thanksgiving after all.

The last thing of the day was for Roger to run a tally of his time and materials, to arrive at the final bill.  Wow!! This canoe project has indeed been a big job, as evidenced by the tally.  I am very thankful that Roger, recognizing this as a challenging and difficult job, gave me a good discount.  On behalf of myself, and my bank account, I thanked him profusely.  I’m already looking forward to a great day 16, when the canoe will indeed be finished. That old camping canoe song ‘Land of the silver birch, home of the beaver…’ has already been repeating in my head. Where’s the closest lake from here?

Day 14 arrives… now I really have spent 2 entire weeks on this project, and it is almost finished.  But today was an odd, and not so much a fun day.  Today felt more like day 13 should have, that’s if I really believed that number 13 means bad luck.

Before I got to Roger’s place I wondered if my canoe originally had external wood stems as well as the keel.  So day 14 started with a difficult conversation.  Roger said the canoe originally had external stems, evidenced by a visit to the junk bin of spare pieces I had brought on day 1.  The pieces he showed me were badly broken so it was difficult, to nearly impossible, to see what they had originally looked like.  Since I still don’t know who the original builder was, and therefore don’t have any drawings, I was doubly in the dark.

Roger explained that external stems did nothing functional, so builders haven’t added them for a long time.  Sensed my disappointment he offered to make some if I really wanted them… stressing, however, the time (and therefore extra cost) for no real functionality.  He also reminded me that, although we had used as much of the original parts as we could, the canoe was already not historically rebuilt.  The added inner gunwale, along with the epoxy filled holes would drive historical canoe fanatics crazy.  I did, after all, want to actually use the canoe rather than mount it on my living room wall.  So I spent the next quarter-hour thinking about my options, while I sanded the parts before the next varnish.  By then, although still conflicted, I decided to forgo the external stems.  After all, I first need to find the original builder and plans before even trying to fabricate what they looked like.  I can always add them in a later year.

Since it was a sunny day I did the second, and full strength, varnish outside.  This helped showing the results of my work, and any missed sections. Soon after I started, however, I kept getting bothered by mosquitos and a lot of wasps that seemed to like the varnish smell.  Before I finished I had successfully managed to spill the varnish on my hand while escaping from a pesky wasp, as well as varnishing the hair on the back of my head trying to swat one away.  (I told you it was not a fun day).  To round off my day, one of my freshly varnished thwarts fell in the grass resulting in me trying to pick grass and dirt out of the varnish.  Not much fun.

Still, the finished product did look great, particularly the mahogany decks that had dried lighter overnight and were again thirsty today.  Only one more varnish coat to go, but that will have to wait another week.  Taking some final pics of my beautiful canoe I prepared to depart.

Before I left, another canoe came in for repairs.  This one looked like it had just come from the set of a horror film.  Along with badly rotted gunwales, the red hull looked like it actually had veins.  It was wrinkled, discoloured, and bulging in many places.  I did a second check to make sure the owner wasn’t Vincent Price, Freddy Krueger, or possibly Herman Munster.  (I told you it was an odd day)  A challenging job for Roger, but I’m sure something he’s seen before, but I’m sure I haven’t.  Day 15 coming in a week.

Well, I made it through my withdrawal.  Day 13 arrived, appropriately on Friday, September the 13th.  How lucky can that be?  I, for one, felt very lucky having returned again to my canoe project.

The canoe was already inside, awaiting the first coat of varnish for the gunwales and decks.  My first job, however, was to stain the external keel that Roger had already cut to fit.  I didn’t really have to stain the keel, as Roger noted that it wouldn’t be seen under the water, but it would have bothered me whenever I took the canoe out and particularly when I turned it upside down to store.  The canoe was already odd enough without making it more so.  So I stained it mahogany to match the gunwales since it was also made of white ash.  Roger took the time to explain how he cuts and installs gunwales, and why.  The surface that fits against the canoe is beveled, on purpose, to ensure the outer edges kept in contact with the canoe.  This prevents the keel from moving too much when bumped.  In addition, Roger is only concerned with waterproofing the holes where the screws are, as this is the only place where water can get inside from the bottom, rather than try to putty the entire keel to the bottom.  Wonderfully logical to me, again making me thankful I’m working with a pro. 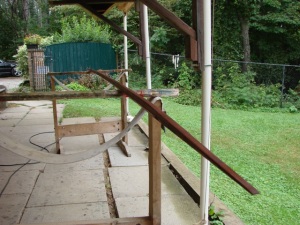 Then it was time to varnish.  Using a varnish/varsol mix I applied it using a sponge applicator.  Carefully… as I didn’t want any runs and drips either outside or inside the canoe.  The mix was particularly important, as the mahogany decks were extremely dry and sucked the stuff up quickly.  I was glad I hadn’t stained the decks as the mahogany went really dark, even more so than the gunwales that I had stained.  The deck wood, when finished, was beautiful. 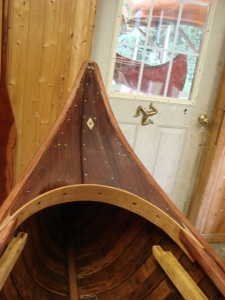 I also hadn’t stained the black cherry facings on the decks, so they came out much lighter.  (On day 3 I had said these facings were rosewood.  They were not.)  It won’t take too long, however, for the cherry to darken to approximately the same colour as the gunwales.  To finish the day I also varnished the thwarts and seats.  It was only afterwards that I discovered that I should not have varnished the underside of the newly caned areas.  Roger said these should be left to breath, but added that one coat of the varnish/varsol should be ok. 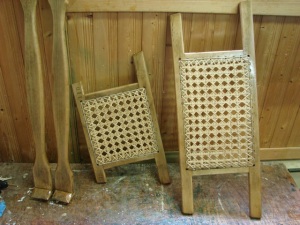 For me, day 13 work was ended after only a few hours as the varnish had to dry.  I did take some time to chat with Bill who just brought his Old Town canoe from Michigan to repair with Roger.  I told Bill he had come to the right place.  Bill’s canoe was about 75 years old, and had been purchased by his father, so Bill was keen to get it back in shape.  I was really impressed by how solid and well-built the Old Town canoe was especially when Bill told me he had canoed down rapids with it.  I don’t think my canoe could handle rapids.  I think she was built for a much easier lifestyle, and that’s just fine with me.

As Roger predicted, he was starting to get busier as the fall set in.  For my job, I have about 3 visits left to go.  Day 14 follows tomorrow.

Buy a copy, get it signed in the store!

Pam, our customer service manager, picks this book as “The Textbook with the Best Title”:

Also points to Principal Sumner for using science fiction in a theology course.

My pick for the most interesting looking textbook: 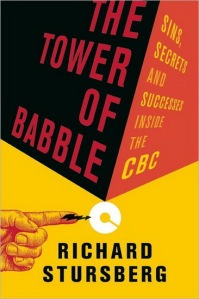 The Crux return policy has been updated. Here it is for your easy reference:

Please note: a 10% restocking fee may apply on certain returns.

The Categories of Crux

Our Days and Years