Day 16 arrived, and I was really looking forward to finally finishing this project that I started late July.  This was the final work day, and Roger had scheduled about 2 hours to finish.  The canoe was dutifully waiting inside the workshop.

Final assembly was the name of the game today, so the first job was to attach the keel and brass stem plates.  Shortly into my first task, I really had to ask myself why I was drilling holes right through the bottom of a perfectly waterproof canoe. 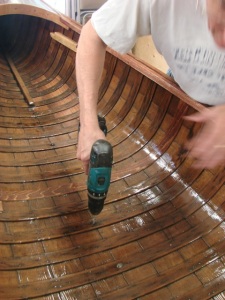 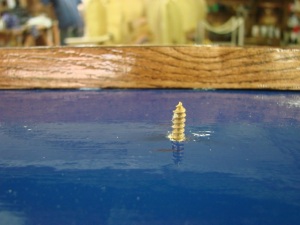 I knew the answer, of course, but it still didn’t feel right.  Oh well, at least the canoe doctor was there.  After numerous holes were drilled, the canoe was flipped and the position of the keel carefully marked on the bottom of the canoe.  With Roger working underneath, while I carefully positioned the keel it was screwed into place.  Next, the brass stem strips were bent to fit, and also screwed in place after pre-drilling the holes.  I chose to have the brass strips minimally showing on the decks, as I really want to highlight the beautiful finish of the mahogany.  When all was screwed in place, and looking great, what did we do then?  Take it all apart of course.  This was necessary, I assure you, since (as you remember) some crazy person (that would be me) had drilled holes which created a now non-waterproof canoe.  But not to worry, there is a method to this madness.  What we did now was to make small putty ‘doughnuts’ and place them over every hole that now existed in the bottom of the canoe.

Then the keel and brass stems were re-attached.  As Roger explained, it wasn’t necessary to waterproof the entire keel against the hull… just the holes.  How very logical.  I must confess, however, that I made one slight mistake along the way.  In the final stage of attaching a brass stem plate to the keel, Roger had said to use a 1/2″ screw.  For whatever reason I though he said to use a 1″ screw.  As I was merrily tightening it in place, I realized I had now just cleared the keel and was putting another (unplanned) hole in the canvas, with no putty doughnut in place.  I continue to be impressed with Roger.  Rather than even look disappointed, which would have been the least I would have done, Roger merely shrugged his shoulders and came up with a solution.  As he pushed a putty ‘worm’ into the hole, he explained that when the screw goes into place it will push the putty into the hole below it and seal any area that might allow water to penetrate.  Again… logical, effective and without judgement on my poor listening skills.

After the keel and plates were secured, and the excess putty removed, the canoe was flipped right side up for the final installs.  Using a large body clamp I placed the thwarts and seats into position.  For the thwarts, I decided to use the small brass plates that had originally been secured them to the outside hull.  Since we had added the inner gunwales, we had already decided the thwarts would be more stable secured to them.  So I used the brass plates on the top of the gunwales, securing the thwarts with two screws in each location.

The plates add a great finished look to the canoe.  The final act was to secure the seats to their holders with screws, again adding more stability to the canoe.  And that was it.  After about three hours of day 16 work, my canoe was now totally completed. 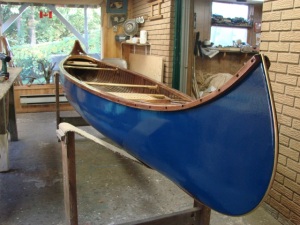 After securing the canoe to the top of my sister’s SUV, it was time to say my sad goodbyes to Roger and Chaucer.  This has been an amazing experience.  I not only took away an incredibly beautiful canoe, but also lots of new skills.  I also took away an appreciation for just how much work, time, and care go into giving a canoe a second life.  Stayed tuned for Launch Day, coming up soon!