Day 15th arrived faster than I thought, and consisted of about 2 hours of work only.  Arriving late afternoon, my canoe was already waiting under the canopy, as it looked like rain was on the horizon.  Today’s work?  Yet another, but thankfully the last, coat of varnish  for the gunwales, decks, seats and thwarts.  (I know the pictures look pretty much the same as the last two days, but I assure you that progress is being made.)

This time I took it really easy on the sanding, particularly of the decks.  The last time I sanded too aggressively and ended up taking off too much varnish.  After sanding came the regular blowing (and brushing) off the dust followed by tack clothing.  Then the final full strength application of varnish.  As opposed to day 14, when several things went wrong, I was careful to take my time and even did the seats and thwarts inside to avoid dropping anything in the grass.  Thankfully the wasps were not numerous today, so I didn’t get varnish any place other than on the canoe.  I made sure the final coat was fully applied and fairly thick going on, but even when finished the decks were still sucking in the varnish… talk about thirsty.  Roger said he would check them in a day, or so, and apply another coat if needed.

I then scheduled my final visit, again in another week’s time, as this project is quickly coming to an end.  Roger said the last day will be about 2 hours of work.  What is left is the installation of the external keel, and the securing of the thwarts and seats into the canoe.  Yippee!! Looks like it may be in the water before Thanksgiving after all. 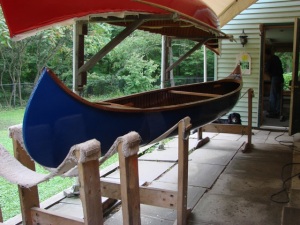 The last thing of the day was for Roger to run a tally of his time and materials, to arrive at the final bill.  Wow!! This canoe project has indeed been a big job, as evidenced by the tally.  I am very thankful that Roger, recognizing this as a challenging and difficult job, gave me a good discount.  On behalf of myself, and my bank account, I thanked him profusely.  I’m already looking forward to a great day 16, when the canoe will indeed be finished. That old camping canoe song ‘Land of the silver birch, home of the beaver…’ has already been repeating in my head. Where’s the closest lake from here?